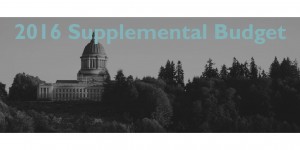 A little after 7 p.m. on Tuesday, March 29th, the Washington State Legislature passed the 2016 Supplemental Budget and adjourned the Supplemental Session later that night.  The budget, which adds $191 million of new spending to the 2015-2017 biennium, passed with a 27-17 vote in the Senate and 78-17 vote in the House.  Thanks to the advocacy efforts of civil legal aid supporters, the Supplemental Budget includes $552,000 for the Office of Civil Legal Aid (OCLA), which administers and oversees state funding for legal aid.

OCLA requested $555,000 in the Supplemental Budget to cover unanticipated health care premium increases and non-personnel costs of its contractor the Northwest Justice Project (NJP). Without this funding, NJP would have been forced to reduce personnel and client service, with potentially devastating impact on our state’s already strained and overwhelmed legal aid system.  For more details, check out this one-pager produced by the Equal Justice Coalition.

Funding OCLA’s request was of vital importance and it is heartening that whether Democrat or Republican, House or Senate members, our elected officials all agreed it was the right thing to do. Other issues were more contentious, but ultimately the negotiated budget increased funding to several key areas including:

Now that the Supplemental Session has adjourned, legislators are able to resume raising money for their re-election campaigns. In 2016, all 98 seats in the House of Representatives and 26 out of 49 seats in the Senate are up for election. Currently the House is majority Democratic, but by a slim margin of 50 to 48. The Senate is majority Republican, by a margin of 25 to 24. The November 2016 elections are incredibly important as they have the potential to bring substantial change to the composition of the Washington State Legislature. We are fortunate that funding of civil legal aid is not a partisan issue and we must work during this campaign season to strengthen support among legislators and candidates regardless of their party affiliation.

As we look ahead to the 2017 session, which is a 90-day budget session, we have a lot of work to do in order to increase access to justice for low-income families and individuals. The results of the 2015 Civil Legal Needs Study Update have identified an alarming and growing “justice gap” among low-income Washingtonians.  During the 2016 session, Representative Drew MacEwen (R-35th District) and Representative Christine Kilduff (D-28th District) each authored op-eds advocating that the state prioritize funding for legal aid. If we are to make good on the Constitutional promise for equal justice for all, we need to work with our State Legislature, as Representatives MacEwen and Kilduff said, to create much greater access to civil legal services.

For more information about how to get involved and to stay up to date on issues related to public funding for legal aid and the Legislature, subscribe to the Equal Justice Coalition’s Advocacy Alerts.