Removing a Barrier to Reentry

On June 24, 2016 I became the first person in our state to obtain a Certificate of Restoration of Opportunity. The Certificate of Restoration of Opportunity (CROP) became available to persons with a criminal conviction on June 9, 2016 after the unanimous passage of ESHB 1553 in the 2016 state legislative session.  The law allows people who have been convicted of certain crimes to petition a judge for a certificate that shows they have completed their sentence and have been law abiding citizens. In the words of King County Prosecuting Attorney Dan Satterberg a CROP is “a receipt that says the person has paid their debt to society and can move forward.” 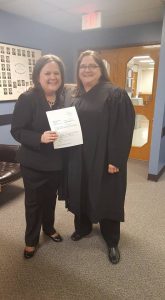 Having served nearly two years in prison, I have a special appreciation for the challenges facing individuals who have been imprisoned and who are seeking to fully reintegrate into society.  As a second-year student at the Seattle University School of Law, working for the summer with Northwest Justice Project’s RISE Project (Reentry Initiated though Service and Education) I wanted to learn the process so that I may help others now and in my future career as a lawyer.  (Law licenses are exempt from the CROP protections, a CROP does not guarantee that my criminal history will be excluded from my bar application – however, I am hopeful that the WSBA will consider it as evidence of rehabilitation).

A CROP relieves barriers to many occupational licenses – such as bartenders, cosmetologists, body piercers, commercial fishers, contractors, drivers, and others – that were once unavailable to persons with a criminal history.   In addition to overcoming barriers to occupational licenses, a person with a CROP may be able to overcome the categorical bars in DSHS regulations for certain types of employment, mainly working with children and/or vulnerable adults.  Moreover, because the Washington State Patrol Background Check is annotated to reflect that a person has obtained a CROP, employers and landlords may be more willing to extend offers of employment or housing to CROP recipients. It will take some time to see the effect that a CROP will have on employment and housing, but advocates, like myself, are hopeful that the CROP will relieve barriers outside of the mandatory occupational licenses.

To file a petition for a CROP, a person can download the forms off the Courts website. The petition must be filed in a qualified court, which is either the sentencing court or the superior court where the petitioner resides. The person must show they are in compliance with all sentencing requirements, and current in payment of their legal financial obligations. Notice to the prosecutor is required, and the prosecutor must provide the court with a report of the person’s criminal history. A hearing is not required, however, many counties are still determining the process.

You can find more information about the new law on Columbia Legal Services’ website.

Lastly, check out an article published in the Kitsap Sun about my story of securing a CROP.