This six part series will address racism and civil legal needs in our country, and offer opportunities to take action to combat these problems. The series, moderated by Ron Knox, will discuss issues such as mass incarceration, voting injustice, policing, housing justice, and education policies. For more information and to register, contact jessican@legalfoundation.org. 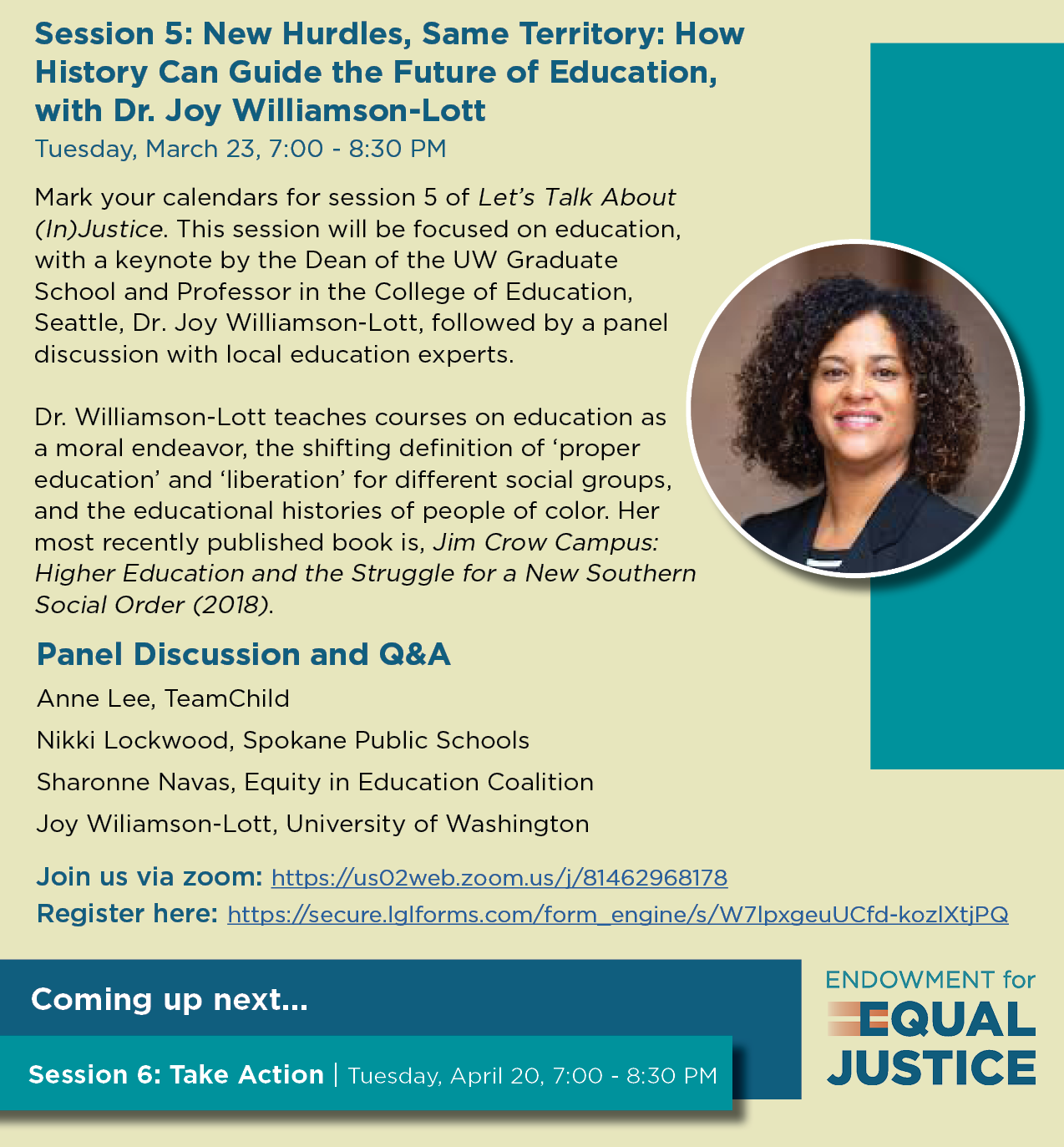 Optional Resources:
A Board Resolution To Establish Equity Policies
DuBois, Does the Negro Need Separate Schools

Ron Knox and Merf Ehman will open the series by sharing their stories, their personal and professional experience with racism in America, what reparations can mean going forward and how we can engage together for change through this six part series.

Merf Ehman
Merf is the Executive Director of Columbia Legal Services.  She has deep experience with multi-disciplinary advocacy through partnerships with local universities, government agencies and national research groups to employ-cutting edge research in the quest for social justice. As a staff attorney with CLS’ Institutions Project, Merf focused on removing barriers to housing and employment for people with criminal records so they could successfully re-enter society. Throughout her career, Merf has trained numerous lawyers, students, and other advocates on working with clients from diverse backgrounds and clients with limited capacity. Merf’s work is informed by her past experiences as a legal aid client and a person living in poverty.  Columbia Legal Services is the largest grantee of the Legal Foundation of Washington, which is the sole recipient of the Endowment’s annual grant.

Ron Knox
Ron Knox is a retired labor & employment attorney.  For over 35 years he worked with businesses, labor unions and individuals on a variety of labor, employment, discrimination, civil rights and immigration issues.  During his active legal career, he served on the boards of a number of public service organizations, including the Washington Leadership Institute, Seattle Appleseed, PROVAIL, and Habitat for Humanity.  He has also been a member of the Board of Trustees of Willamette University.  In retirement, his principal focus has been as a board member of the Endowment for Equal Justice and on various equal justice initiatives

If you have 2 hours:

If you have several hours:

Book: CASTE: The Origins of Our Discontent, by Isabel-Wilkerson – The Pulitzer Prize–winning, bestselling author of The Warmth of Other Suns examines the unspoken caste system that has shaped America and shows how our lives today are still defined by a hierarchy of human divisions.

Jeffery Robinson is a deputy legal director and the director of the ACLU Trone Center for Justice and Equality, which houses the organization’s work on criminal justice, racial justice, and reform issues. Since graduating from Harvard Law School in 1981, Jeff has three decades of experience working on these issues. For seven years, he represented indigent clients in state court at The Defender Association and then in federal court at the Federal Public Defender’s Office, both in Seattle. In 1988, Jeff began a 27-year private practice at the Seattle firm of Schroeter, Goldmark & Bender, where he represented a broad range of clients in local, state, and federal courts on charges ranging from shoplifting to securities fraud and first degree murder. He has tried over 200 criminal cases to verdict and has tried more than a dozen civil cases representing plaintiffs suing corporate and government entities. Jeff was one of the original members of the John Adams Project and worked on the behalf of one of five men held at Guantanamo Bay charged with carrying out the 9/11 attacks.

In addition to being a nationally recognized trial attorney, Jeff is also a respected teacher of trial advocacy. He is a faculty member of the National Criminal Defense College in Macon, Georgia, and has lectured on trial skills all over the United States. He has also spoken nationally to diverse audiences on the role of race in the criminal justice system. He is past president of the Washington Association of Criminal Defense Lawyers and a life member and past member of the board of directors of the National Association of Criminal Defense Lawyers. Jeff is also an elected fellow of the American College of Trial Lawyers.

He will be featured in an upcoming documentary based on his powerful presentation on racism in America titled, ‘Who We Are: A Chronicle of Racism in America’.

Award winning UW Communications Professor and founder of Common Power, David Domke will speak about voting injustice in our country and share insights from the November 3rd  election..

David Domke
David worked as a journalist for several newspapers in the 1980s and early 1990s before earning a Phd. in 1996. He is a Professor in the Department of Communication at the University of Washington, and for the past decade he has served as Department Chair. His research has focused on communication, politics, and public opinion in the United States, and in recent years Domke has worked closely with several organizations on communication and engagement in the public arena. He is committed to inter-racial and inter-generational community building, and was one of a group of community members who created civil rights pilgrimages to the US South in 2014; that work is now led and organized by non-profit Project Pilgrimage. In 2002 he received the University of Washington’s Distinguished Teaching Award, the university’s highest honor for teaching. In 2006, he was named the Washington state Professor of the Year by the Council for Advancement and Support of Education and the Carnegie Foundation for the Advancement of Teaching. In 2008 he was selected as the favorite professor of the UW graduating class. In 2018 he worked with an incredible team to launch Common Purpose, and he now serves as its Director of Fieldwork & Learning.