In short, the amount of money held in IOLTA bank accounts continues to increase and therefore earn more interest, despite unchanged interest rates and fewer accounts reporting for the period.

For the second consecutive quarter, cash balances in both Attorney and Limited Practitioner Officers (LPO) IOLTA accounts have grown, generating an increase in interest revenue by 13% and 19% respectively year-over-year. It will be interesting to see if this trend, particularly the strong growth in LPO accounts, will extend into the final quarter of the year. 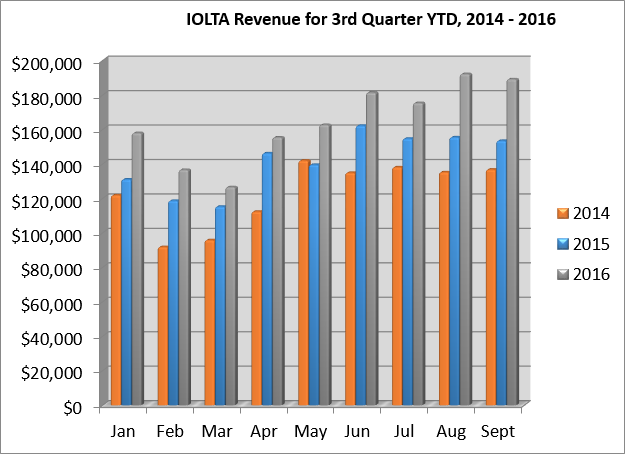 Additionally, there is promising news regarding interest rates. While the Federal Reserve voted against an increase of its benchmark rate in September, many analysts believe a rate hike in December is imminent and forecast a few increases in 2017.
LFW remains hopeful that these will occur, but it will take a series of significant rate increases to bring IOLTA revenue back to levels seen before the 2008 – 2009 financial crisis. As a point of reference, the federal funds target rate was 4.75% in September 2007 (current rate ranges from 0.25% to 0.5%) and IOLTA interest revenue averaged ­­­­­­$2.3M per quarter. The deficit to recover is large, but any rate increase will be moving in a positive direction.

Finally, LFW received four cy pres awards during the third quarter, totaling $44,413. We did not receive any other special funding during the period.

If you have any questions about our third quarter revenue, please contact us.