Our efforts were part of the American Bar Association’s annual ABA Days in Washington, DC – where delegations from all 50 states convene to meet with their representatives and senators about  access to justice for low-income Americans. This year’s EJC group consisted of:

For the second year in a row, the Trump Administration proposed the complete elimination of the Legal Services Corporation (LSC), which administers and grants federal legal aid dollars to all fifty states. However, there is strong bipartisan support of LSC in Congress. In late March, Congress passed the Fiscal Year 2018 budget, which included a $25 million increase for LSC (bringing the total funding to $410 million). This is the largest increase for LSC in recent years, and it is the highest appropriation level since 2010.

During our meetings in D.C., we thanked our legislators for passing a budget that increased funding for LSC, and we encouraged them to take another step in solving our civil justice crisis by increase funding to $482 million, which is the inflation-adjust equivalent of the 2010 funding level. If LSC were funded at $482 million, Washington State would receive approximately $8 million, all of which is directed our state’s LSC-grantee, the Northwest Justice Project. While this increase would not solve this crisis, it would be a healthy step in the right direction, providing critical civil legal services for thousands more low-income families and individual across the state. 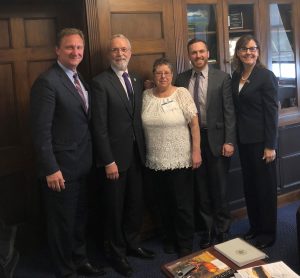 According to LSC, nearly one in three Americans – 95.2 million people – qualify for federally funded legal aid during some point in any given year. In other words, 95.2 million Americans live at or below 125% of the federal poverty level during all or part of a year. Washington state is experiencing similar trends, as more people than ever are eligible for civil legal aid – 1.25 million.

Our chances of receiving another increase in the Fiscal Year 2019 budget are encouraging as bipartisan support continues to grow. Days before we arrived in D.C., 181 members of the House of Representatives (151 democrats and 30 republicans) signed a joint letter in support of funding LSC at $482 million for Fiscal Year 2019. This was the largest number of members to ever sign such a letter, and six Washington Representatives were a part of that list – Suzan DelBene, Rick Larsen, Pramila Jayapal, Dave Reichert, Adam Smith, and Denny Heck. The Senate followed suit a few days later with a letter for their own, which included 44 Senators (41 democrats and 3 republicans). Both Washington Senators – Maria Cantwell and Patty Murray – signed. Lastly, a group of 251 general counsels from companies around the country submitted a letter to the chairs of the Congressional budget committees in support of the FY 2019 funding request. The general counsels of Washington-based Starbucks, Amazon, Microsoft, RealNetworks, and Alaska Airlines were among the 251 signers.

By meeting with our Congressional delegation each spring, we are helping to shape the narrative of what our country should prioritize and what is important to our state – equal justice for all, regardless of income.  We encourage you to take a moment and speak up, as well. Contact your U.S. Representative and Senators, and ask them to increasing funding for the Legal Services Corporation. If we are not taking the time to voice our priorities, then someone else will.