Speaking Up for Civil Legal Aid in the Other Washington

The annual Equal Justice Coalition trip to Washington, D.C. brings civil legal aid leaders from our state to Congress to speak up for access to justice. On April 9-11, 2019, the EJC joined advocates from around the country for the American Bar Association’s ABA Days. This year’s group met with all 12 of Washington’s Congressional delegation, to educate lawmakers on the impact of civil legal aid programs in their districts and to ask for increased funding for the Legal Services Corporation (LSC), which supports the Northwest Justice Project (NJP). The group included (from left to right): 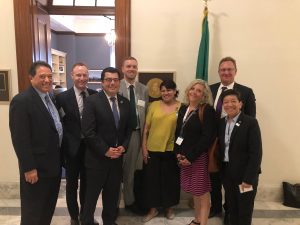 The EJC asked Washington’s members of Congress to support LSC’s request for $593 million in funding for Fiscal Year 2020. LSC is funded at $415 million for the current fiscal year. NJP, Washington’s sole recipient of federal legal services funds, receives around $7 million, and would see a notable increase in funding if Congress approves the LSC request.

For the third year in a row, the Trump Administration budget proposes the complete elimination of the LSC. But fortunately the agency has broad bipartisan support in Congress, including among the Washington delegation. Washington Representatives Suzan DelBene, Denny Heck, Pramila Jayapal, Rick Larsen, Kim Schrier, and Adam Smith signed onto a recent bipartisan letter urging the House Appropriations Subcommittee on Commerce, Justice, Science and Related Agencies, which oversees LSC, to protect legal aid from budget cuts and increase next year’s funding level to $593 million. Both Washington Senators, Maria Cantwell and Patty Murray, also support the increase.

Such an increase would be an important step forward, and would provide critical services for thousands more low-income families and individual across Washington. But it would still be far below the agency’s historic peak, and would not meet the overwhelming need for civil legal assistance. Nearly 2 million Washingtonians are income-eligible for civil legal aid, but only one in four are able to access help with a legal issue due to the lack of adequate resources.

The EJC is grateful to our representatives for meeting with us and standing up for civil legal aid, but more work remains to build on the bipartisan momentum for LSC funding and expand access to justice in Washington and across the country. Learn more about how to support LSC and get involved with the ABA’s federal advocacy.