Each spring, the Equal Justice Coalition travels to Washington, D.C. to advocate for increased federal funding for civil legal aid. From April 19-21, we met with all of Washington state’s representatives and both senators to urge them to fund civil legal aid at the Obama Administration’s requested level of $475 million. Here’s our one-pager about the request.

Our efforts were part of the American Bar Association’s annual ABA Days in Washington, DC – where delegations from all 50 states convene to meet with their representatives and senators about furthering access to justice for low-income individuals and families. This year’s EJC group consisted of: 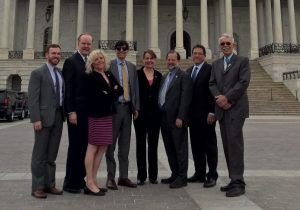 Since 2010, funding for Legal Services Corporation (LSC), which administers and grants all federal legal aid dollars, has decreased by roughly 8%, but the need for legal aid is at an all-time high. LSC is currently funded at $385 million. Of this, Washington state receives roughly $6.6 million, all of which is directed to the Northwest Justice Project.

According to LSC, nearly one in three Americans – 95.2 million people – qualified for federally funded legal aid at some point during 2014. In other words, 95.2 million Americans lived at or below 125% of the federal poverty level during all or part of 2014. Washington state is experiencing similar trends, as more people than ever are eligible for civil legal aid – 1.25 million.

While an increase in federal funding to $475 million would not solve this crisis, it would be a healthy step in the right direction, putting federal funding for legal aid at its highest level since 2010. 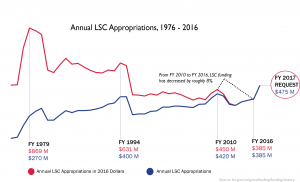 Unfortunately, the chances of receiving an increase in 2017 funding seem slim, as Congress will likely delay passing a new budget until after the November elections. While we were in DC, the Senate Appropriations Committee approved a bill to increase FY 2017 funding for LSC by $10 million over the current appropriation – $395 million up from $385 million. However, progress in the House appears to be stagnant, and several of our Representatives told us that they anticipate a continuing resolution in lieu of a new budget next fall, so LSC funding will likely remain flat until a new Congress takes office.

By meeting with our Congressional delegation each spring, we are helping to shape the narrative of what our country should prioritize and what is important to our state – equal justice for all, regardless of income.  If we are not speaking up and taking the time to voice our priorities, then someone else will.