CLS could not do this important work in our communities without our partners and supporters, including the financial support of the Legal Foundation of Washington. We are excited to continue fighting for fairness for all people throughout all aspects of the legal system. 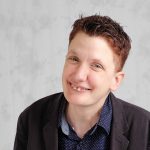