On Thursday, February 16, 2017, people from around the state convened in Olympia to advocate for state funding for civil legal aid as part of the Equal Justice Coalition’s Legal Aid Lobby Day. The advocates represented 30 out of the state’s 49 legislative districts, and in total, they met with more than 75 members of the state legislature.

Representative Laurie Jinkins (27th) and Senator Jeannie Darneille (27th) speak to advocates as they prepare to meet with legislators.

During the meetings, advocates urged legislators to increase state funding for legal aid by approximately $12 million.

“I took a day off work and traveled across the state to meet with my lawmakers about civil legal aid funding,” said A’Lesha Kinder, Spokane native and former recipient of civil legal aid. “Legal aid saved my family when my children and I were fleeing from a violent situation. And I was one of the lucky few who was able to get services. Justice should never depend on how much money you have. I think that’s something we can all agree upon.” 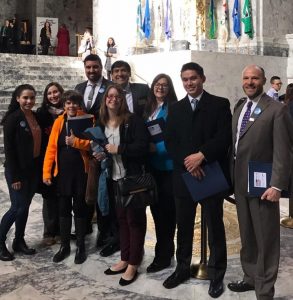 Between meetings, advocates stop for a picture in the Legislative Building.

Currently, civil legal aid receives a biennial appropriation of only about $25 million, which as research shows, is insufficient to address critical needs. Findings from an independent, academic study released in 2015 document that approximately 7 out of 10 low-income households in Washington experience at least one civil legal problem each year, but only 1 out of 4 of those households are able to get legal help to solve that problem. Additionally, research from around the country indicates that civil legal aid is a smart government investment, returning anywhere from $2 to $9 for every dollar invested.

Washington’s leading businesses recognize the societal and economic benefits of investing in civil legal aid.  General Counsel from fifteen leading companies in Washington – including Microsoft, Alaska Airlines and Starbucks –encouraged the Legislature to increase the state’s investment in these services. In a letter to legislative leaders and budget writers dated February 15, 2017, these companies wrote, “Our society is grounded on the fair administration of justice under the rule of law.  We believe it is unacceptable that so many of our fellow Washingtonians feel effectively shut out of our justice system.” Legal aid advocates shared this letter with legislators during their meetings on February 16th.

If the state increases funding for civil legal aid by $12 million, thousands more families will receive access to critical civil legal services. The increased investment would significantly reduce the ratio of legal aid attorneys to low-income people. The current ratio is roughly 1:9,000, and advocates hope to reach 1:5,000 in the next four years. Additionally, the increased investment earmarks funds to work with tech companies to create self-help and self-referral applications, allowing people to diagnosis their civil legal problems and find the right resources.

“Our lawmakers have a big task in front of them to fully fund education, and the state needs that,” said Sal Mungia, Chair of the Equal Justice Coalition and Partner of Tacoma-based Gordon Thomas Honeywell, LLP. “The people of Washington also need other critical services, like civil legal aid. Our budget is a reflection of our values, and I think we all value justice and fairness. We have a civil justice crisis in Washington, but with help from the state, we can solve it.”