36 Hours in the Life of Paulette Brown

This past Friday was the Legal Foundation of Washington’s annual fundraising event – The Goldmark Award Luncheon. Not only was it the 30th iteration of luncheon, but it was also the most successful luncheon to date, raising over $125k. We were extremely fortunate to have the American Bar Association President Paulette Brown fly across the country to keynote at the luncheon. President Brown delivered a compelling, charismatic and uplifting address that was instrumental in making the event a success.

For some brief context, Paulette Brown is an extraordinary person whose entire life has been devoted to breaking down barriers that prohibit large segments of our population from accessing opportunities, especially in the legal profession. Ms. Brown is the first African American woman and first woman of color to hold the position of ABA President. She is a Partner and co-chair of the firm-wide Diversity & Inclusion Committee at Locke Lord LLP. Ms. Brown’s resume is incredibly impressive, and you can find much more detail here. 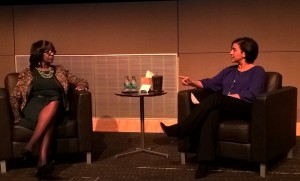 Luckily for the rest of Seattle, President Brown’s visit was not limited to the luncheon. In roughly 36 hours, Ms. Brown attended 7 engagements, including keynoting in front of approximately 600 people. None of her time in Seattle was wasted, which speaks to her commitment to her work and profession. I had the honor and privilege of escorting her to all her engagements around the city, and as a fly on the wall during her meetings, I was nothing but awestruck. Here’s what she did while she was in Seattle:

Of course President Brown’s resume and extensive accomplishments speak for themselves, but the manner in which she conducts herself and engages with others is truly remarkable. She is down-to-earth, extremely likable, and refreshingly honest. During several of her engagements, Ms. Brown said something to the extent of, “I’m selfish and I’m impatient,” and after the audience stopped laughing, she explained that she was speaking about her desire to create immediate, powerful, and sustainable change with regards to diversity and inclusion in the legal profession.

She was also humble, and she never missed an opportunity to credit others in her life for all of the support, mentoring, and guidance that has helped her to succeed. That’s a big part of why she makes it a priority to visit Boys & Girls Clubs. As she often recounted, she didn’t know any lawyers when she was growing up. As the first person in her family to go to college, Ms. Brown had every intention of becoming a social worker, but her freshman roommates convinced her to become a lawyer, saying that she could affect more change as a lawyer. She hopes that by visiting Boys & Girls Clubs that young people of color will see an example of what they can become. 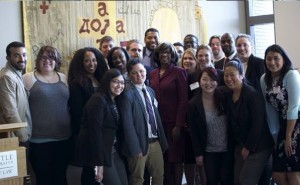 As you can imagine, Ms. Brown is a role model for many young lawyers and law students of color. During several of her speaking engagements, she was asked questions from people of color about her ability to succeed in a disproportionately white profession, her ability to persevere in the face of sexism and racism, and her ability to affect change as a woman of color. As a white man and a person who is not an attorney, I can by no means relate to the experiences had by people of color in a field that is over 80% white. However, I can say that Ms. Brown’s presence in Seattle at these different events and her willingness to engage and dialogue about her experiences was an inspiration. Everywhere she went, she was met with praise and admiration. Everywhere she went, she left people feeling hopeful and excited to make a difference.

I am truly humbled to have witnessed the profound impact that one person can make within a 36 hour period. President Paulette Brown is hardly in need of my approval and admiration, but she has them both, along with my appreciation.