Tarra Simmons, SU Law Student and 2016 Goldmark Intern, addresses the crowd about the barriers she faced after incarceration.

We are thrilled to announce that the 2016 Charles A. Goldmark Awards Luncheon raised a record-breaking $125,000! Thanks to our sponsors all proceeds from 456 individual donors at the lunch will go to LFW’s Campaign for Equal Justice, which fuels legal aid organizations across Washington state. 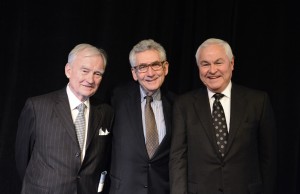 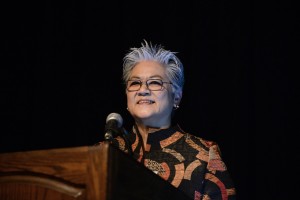 Ada Shen-Jaffe presented a video honoring their accomplishments, including Horowitz’s tireless efforts in advocacy for marginalized populations and Andrew’s and Hutcheson’s role in establishing the LAW Fund. Recently, LFW and LAW Fund merged and fundraising is now channeled into the Campaign for Equal Justice and the Endowment for Equal Justice, two key vehicles that ensure stable funding for Washington’s legal aid organizations.

After the Award presentation, the audience was spellbound as Tarra Simmons, the 2016 Goldmark Equal Justice intern, spoke about her personal experience of incarceration. Simmons said that without crucial assistance from LFW grantees, Columbia Legal Services, Northwest Justice Project and Kitsap Legal Services, she would not be where she is today: near the top of her class at Seattle University School of Law and ready to embark on a promising career. Her remarks echo her earlier presentation to the State Supreme Court about the Civil Legal Needs Study (.pdf). 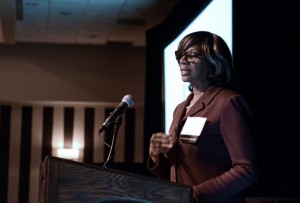 Keynote Speaker Paulette Brown, American Bar Association President, lauded the honorees, expressed appreciation for Ms. Simmons’ willingness to share her struggles, and reminded the audience that “to whom much is given, much is required.” For more on President Brown’s visit to Seattle, read “36 Hours in the Life of Paulette Brown” by Jay Doran, Education Director of the Equal Justice Coalition.